The latest British export will be arriving in Florida this weekend (14-16 June) when the P1 AquaX USA Championship launches in Daytona Beach. 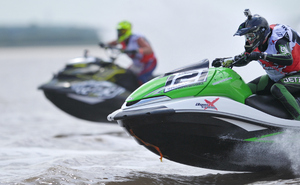 The British have a passionate relationship with sport and they proudly claim to have invented many of the world's leading sports. Their latest export will be arriving in Florida this weekend (14-16 June) when the P1 AquaX USA Championship launches in Daytona Beach. AquaX (pronounced Aqua Cross) jet ski racing runs alongside the P1 SuperStock powerboat series in the UK, where it has become a favourite with watersport fans around the country, and the same format will be adopted in the USA.

The new series kicks off at the Plaza Resort Hotel in Daytona Beach next Friday and will then visit three other Florida venues across the summer. It is designed to attract amateur riders to enter the sport of competitive watercraft racing by offering competitors an exciting challenge whilst keeping costs to a minimum.

P1 AquaX is open to sit-down watercraft, with Yamaha, Kawasaki and BRP (Sea-Doo) models racing unmodified in three classes and a potential prize purse of $15,000 on offer across the classes. Running at the same time, the AquaX Cup is open to all riders, including those with modified craft falling outside the standard class structure. Each two-day event will consist of a mandatory 20-minute practice and a race course orientation session followed by three 30-minute plus one lap rallies when the focus switches to endurance riding and stamina over large courses.

Head of P1 AquaX, Lisa Barsby, said: "We are delighted to be taking the series to the USA. It has gone from strength to strength since being launched in the UK two years ago and we're aiming for similar success across the Atlantic. A comprehensive marketing support program - including TV coverage, media relations activity and extensive online exposure - will promote the riders, venues and sponsors."

Riders from the USA, Mexico and Great Britain will be competing this weekend. One of the first to sign up for the series was Mexican born Alex Morgan, who now lives in Miami and has both European and world jet ski titles to his name. In the same 300hp race class as Morgan will be multiple national and world champion Eric Lagopoulos. UK-born Jeff Thornton is an experienced car racer and he will be one of many rookie riders joining P1 AquaX and Thrust Innovations Amatuer freestyle rider, Lucas Vasconcelos from Orlando, FL. will also be on deck to demonstrate his freestyling skills.