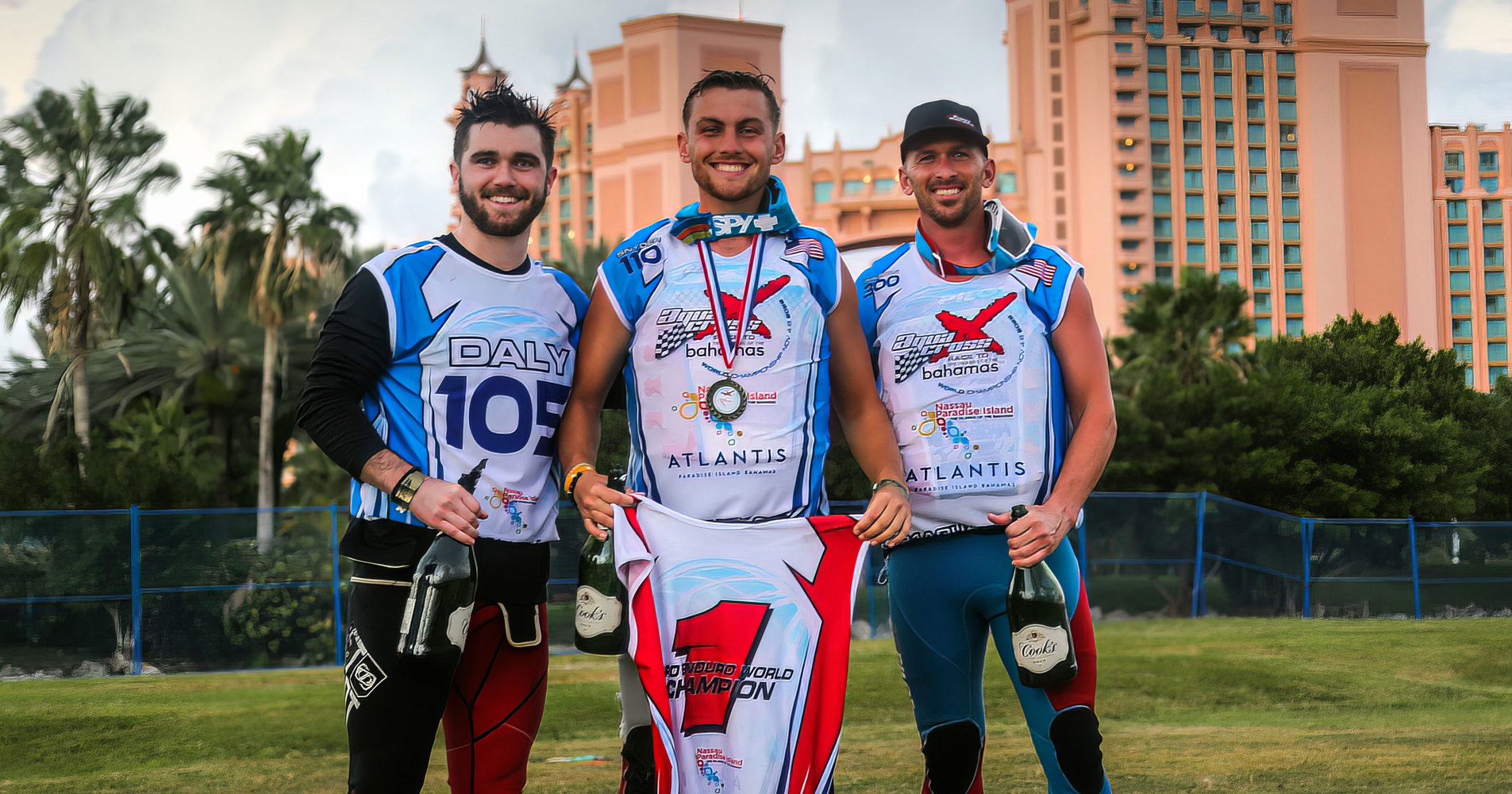 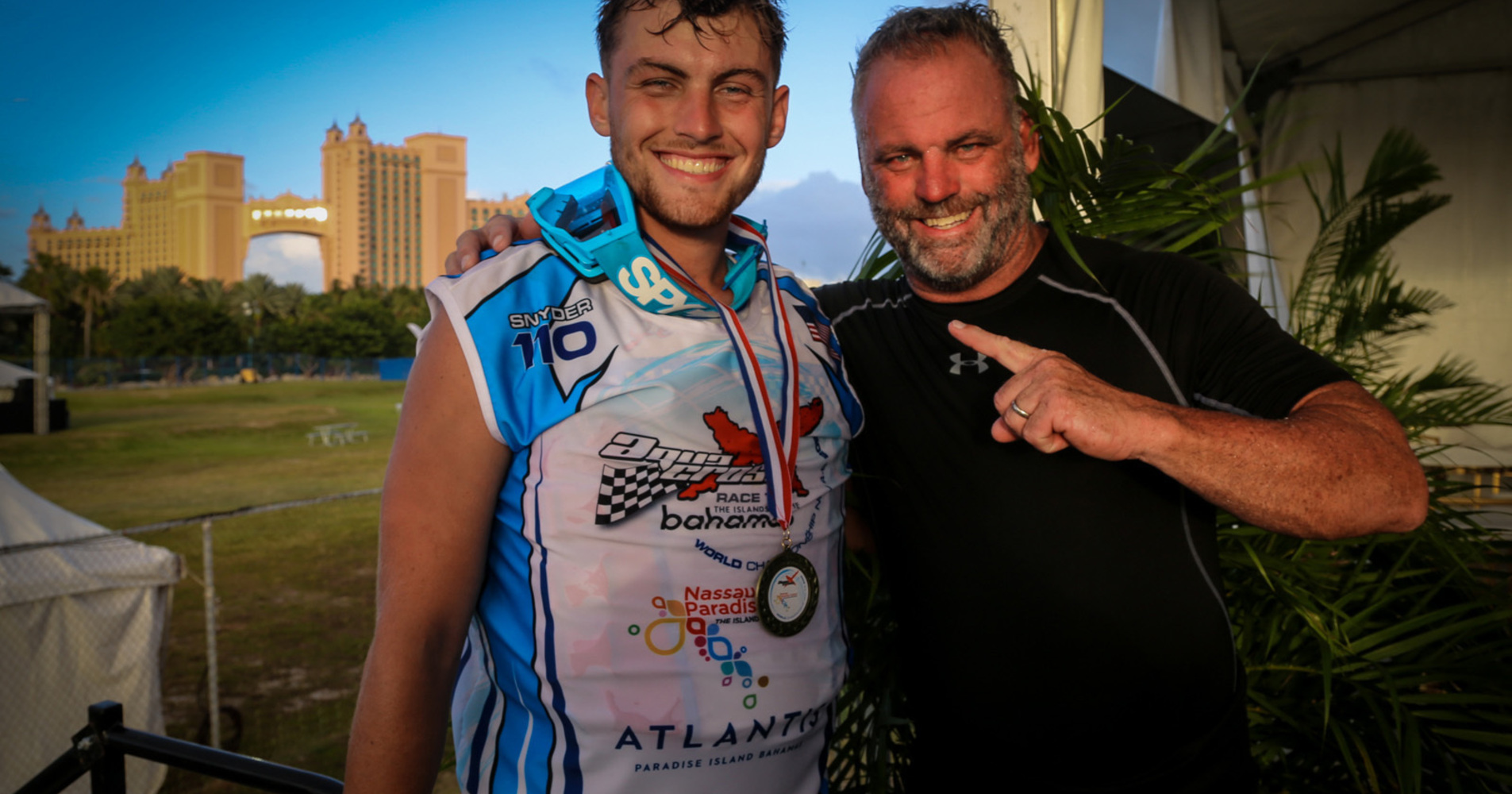 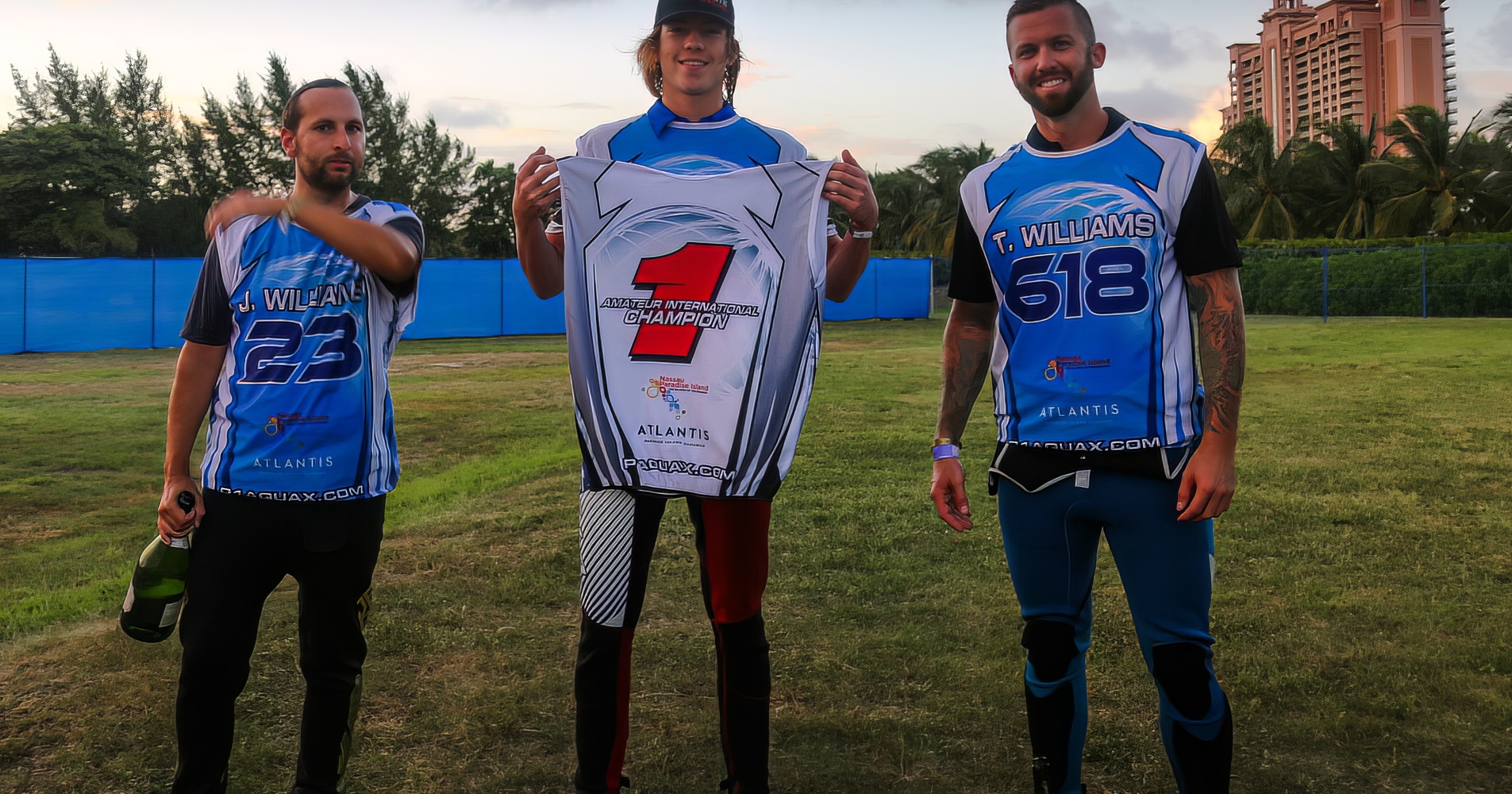 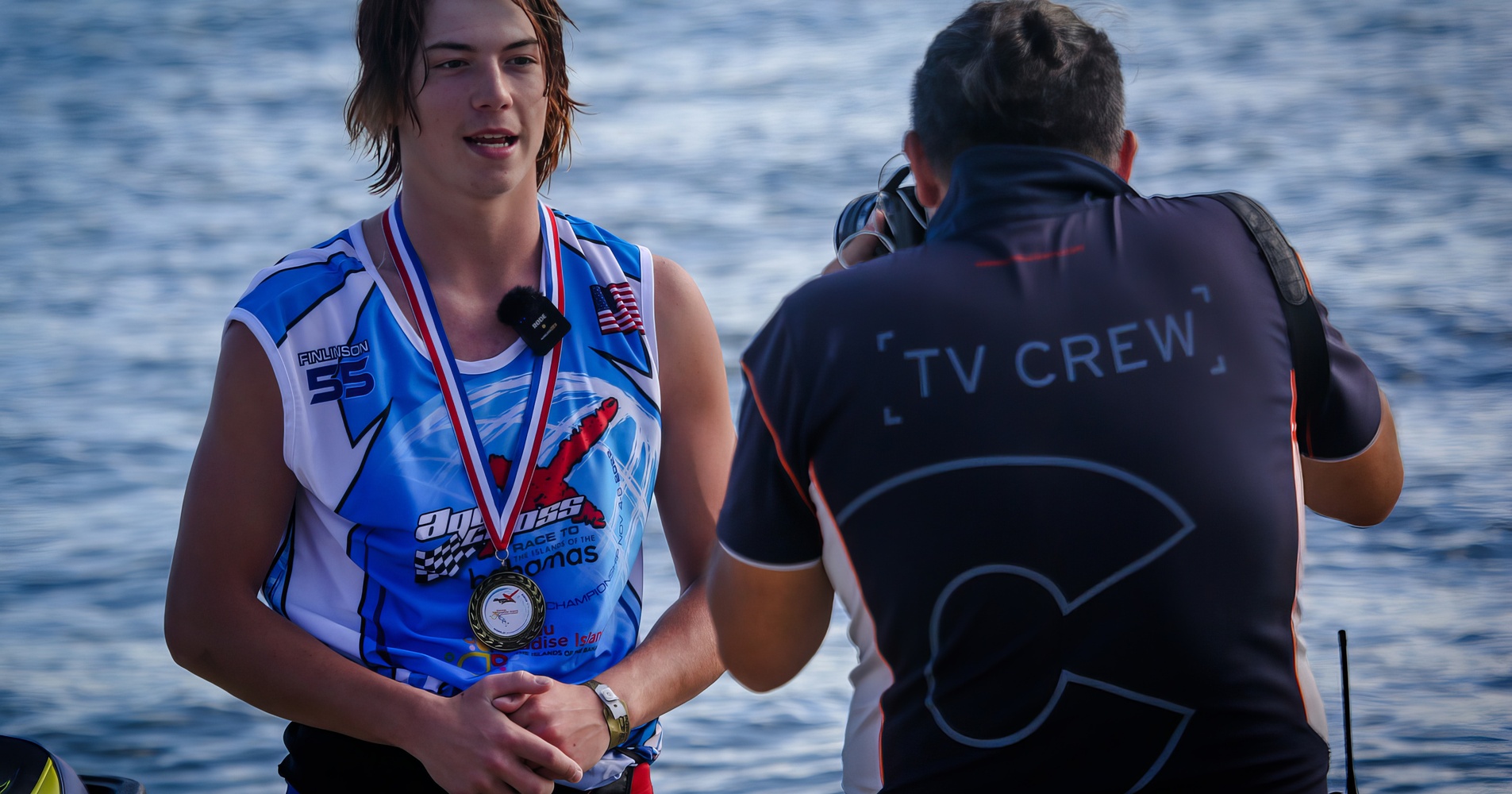 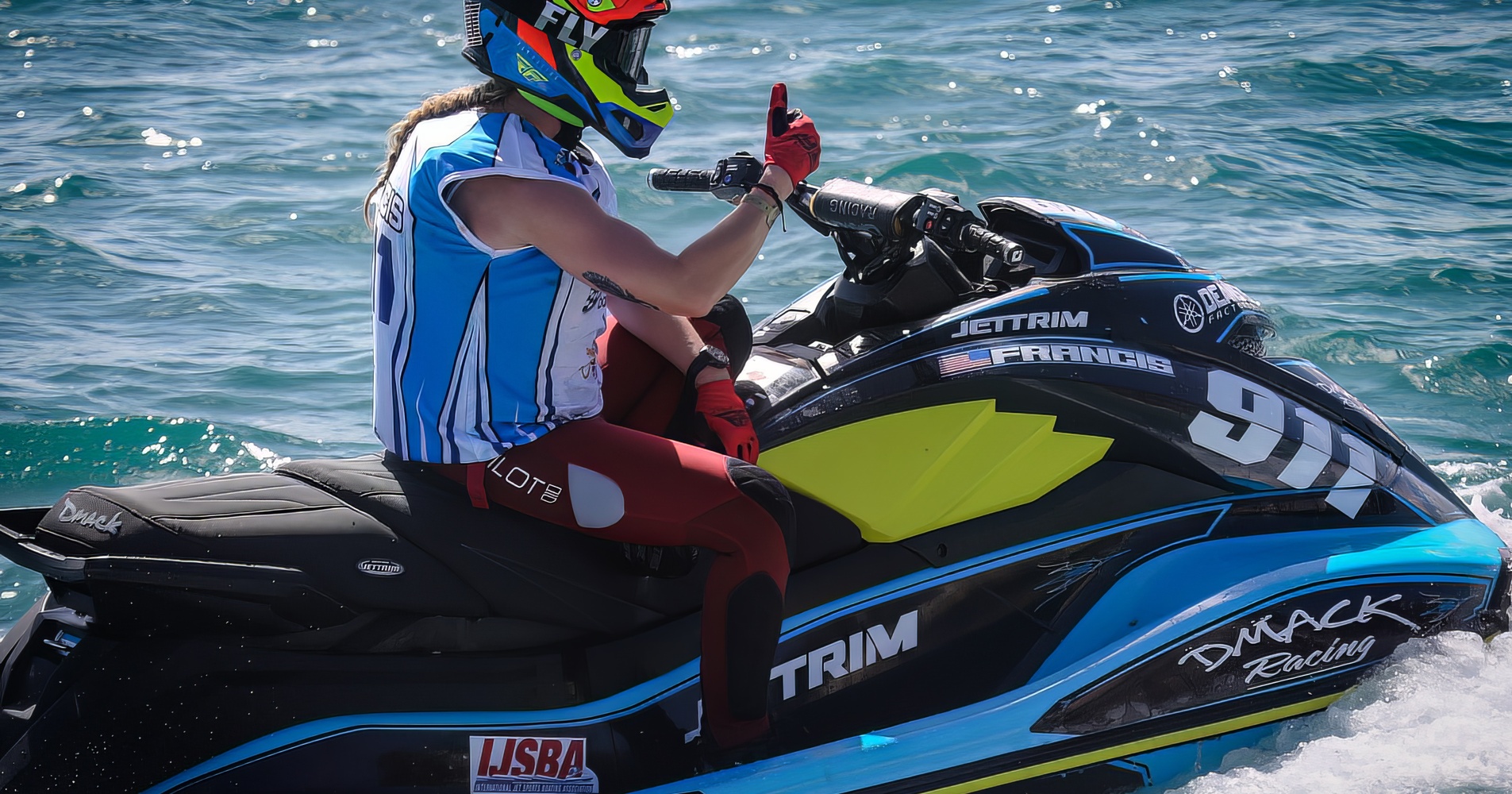 The Caribbean waters have been good to me this year and hopefully, I can come back next year and do the same thing. I had mechanical issues on the last lap in some races this season, so it feels good to end the year with a win and I’m happy.
Tory Snyder
P1 AquaX Enduro Pro World Champion

Tory Snyder was crowned P1 AquaX world champion on Sunday at the climax of the three-day Bahamas World Championship.

The nineteen-year-old from Bradenton in Florida finished second in the opening two races in Nassau harbour and clinched the title by winning the final race. “In April I went to the Cayman Islands and won a leading endurance race and I’ve now won here in The Bahamas,” said Tory as he hugged his father and fellow racer, Troy Snyder. “The Caribbean waters have been good to me this year and hopefully I can come back next year and do the same thing. I had mechanical issues on the last lap in some races this season, so it feels good to end the year with a win and I’m happy.”

This year’s P1 AquaX Pro Enduro champion, Jimmy Wilson from North Carolina, finished as runner-up ahead of Christian Daly. Mechanical issues in the final race ended Chris MacClugage’s championship hopes and the sport’s most decorated and highest-winning world champion had to settle for fourth place.

The unstoppable Jay Finlinson continued to dominate the Amateur class and the 17-year-old travelled home to Northern Indiana with the P1 AquaX Amateur International Cup in his holdall. Trey Williams and Jason Williams took podium places, with Cline Glidden from the Cayman Islands in fourth place.

The P1 AquaX awards ceremony at the iconic Atlantis Paradise Island resort on Sunday evening honoured this year’s United States national champions as well as the new world champions. The P1 AquaX ‘Eagle’ Trophy in memory of the 2019 AquaX world champion Eris Francis, who sadly passed away earlier this year, was presented to Chris Landis by Eric’s widow, Sophie. Eric brought Chris into the sport and Chris received the trophy for being an outstanding ambassador for P1 AquaX and for his valuable help with the logistical planning for the Bahamas event.

The Pro Rookie of the Year award went to Deven Farthing, who had an impressive first season of Enduro racing, and Broward Motorsports received the 2022 Team of the Year trophy.