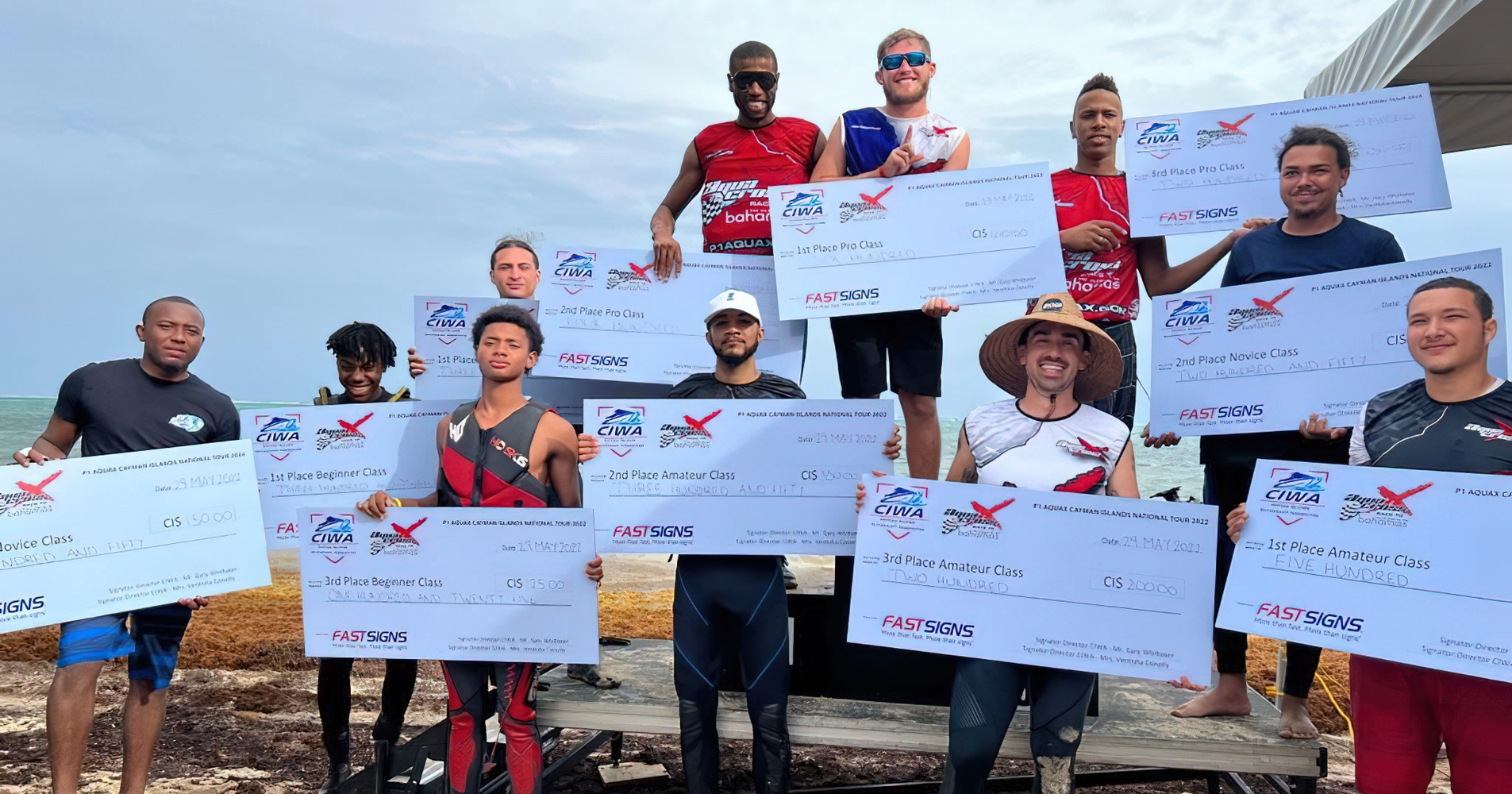 The 2022 P1 AquaX CIWA National Tour kicked off on May 29th at South Sound on Grand Cayman Island. This was the first race of the 2022 season for CIWA, which is in its 12th year as an IJSBA affiliate, and this year the Tour will also serve as a feeder series for the P1 AquaX Bahamas World Championship in Nassau in November with two Pro riders qualifying for the event. . .

Mother Nature would greet the opening round with overcast skies, but that wouldn’t dampen the spirits of the more than 20 riders who have eagerly anticipated the start of this season after having the last two seasons cut short due to Covid. The race featured four classes: Beginner, Novice, Amateur, and Pro, and they were running on a much larger course than they were used to, which is a huge part of training them. This event was presented by the Cayman Islands Ministry of Youth, Sports, and Culture. The event was also sponsored by Car City, Health City, Pepsi, Burger Shack, Paragon Builders, The Bird (Great place!), Verdant Isle Farms, Automotive Art, Fast Signs, JNM Equipment, and National Logistics.

Racing began immediately following the Riders Meeting and it was refreshing to see a lot of new CIWA officials, riders and race fans parked as far as the eye could see. There were three motos in each class and the morning began with the Beginner Class. James “Bond” Munroe, who began racing in 2021, led every lap of this class and seems to have a great future in racing as he had a natural flow with his riding style, which netted him the top spot on the podium for the weekend. The Novice Class was a lot tighter with Josh Watleron on a Yamaha emerging as the victor in moto #1 ahead of past Kawasaki pilot, Aaron Miller, who led most of the race and was passed on the last lap. Leroy Whittaker had to watch from the beach while repairing a clutch; however, after the clutch was fixed he came back to win the last 2 motos, but Miller was consistent enough to place 2-2-2 and that gave him the overall win ahead of Whittaker and Brandon Elliot in 3rd place.

The Amateur Class boasted a host of talent including Chris Bodden, sponsored by Wes-Tec, who grabbed the holeshot in moto #1 and never looked back, going wire to wire for the win. In moto #2, Cline Glidden, who injured his ankle earlier, proved that he could race through pain and continued his dominance in the 3rd moto to get the top spot for his sponsor, Toy’s Toys. Dylan Mclaughlin took three consecutive 2nd places which gave him a 2nd for the weekend and Chris Bodden aka “the hardest working man in show business” completed the podium. The Pro class was fast and furious!. In the first moto, former Amateur Champion, Mathew Panton grabbed the holeshot, followed by JJ McLean and there was a heated battle between team-mates Gary GJ Whitakker and Seth Watler from the Nuttin to Lose Racing Team. On the 3rd lap, Whittaker and Watler got together and unfortunately for them, they both went for an unscheduled swim. Both racers were fine, but Whittaker was unable to continue due to a broken seat latch. Panton would go on to win and ride flawlessly over the rest of the afternoon and he took home the largest cash prize of the day along with bragging rights on this opening National Tour weekend. JJ McLean, former IJSBA Expert World Champion, took 2nd place and Pro Rookie, Thase Watler, found himself on the podium in his first race after moving up the ranks. The total cash purse was nearly $5,000 USD.

A very special thanks to P1 AquaX, DJ Fross and his new minion DJ Denziel for creating the awesome vibe. Thanks to Cayman Islands Fire Dept, Police Dept, the Locale, and all of the great Vendors, Co-Sponsors, families, race fans, and of course my island guides… Vaine and Glen. This was a great weekend to kick off the 2022 season. For those of you that have never raced in the Cayman Islands, you don’t know the experience. you are missing. The next race for the P1 AquaX CIWA Nationals is slated for July 23 in Cayman Brac. Check out the CIWA Facebook page for more information. I hope to see everyone soon - safe racing and fun riding.